Nick has been Musical Director of the Nottingham Hospitals Choir since 2006 and  BJCS since 2014. He also sings tenor in the choir of St Barnabas (Nottingham) Cathedral. He gained a honours degree in music at ARU in Cambridge where he majored on Oboe and held the post of chapel organist at St Edmunds College; his many musical interests include: piano, oboe, organ, percussion, singing and conducting. He has conducted in many locations including: Nottingham’s Royal Concert Hall, Albert Hall, St Barnabas Cathedral, Southwell Minster, as well as Liverpool’s Anglican Cathedral.

Nick has a passion for the music of contemporary composers and has commissioned works from Alan Bullard, Nick Thorpe, Rob Steadman and most recently, Colin Wolfe, as well as championing the music of Bob Chilcott.

Nick has worked at local Music Shop, Windblowers, since graduating in 1998. He has attended workshops with Sir Colin Davis, Bob Chilcott, Nigel Perrin and with Sir Andrew Davis.

He has toured extensively as a musician throughout Europe and also to the Eastern USA, Australia and Singapore. Nick can sometimes be heard on BBC Radio Nottingham’s Sunday morning show with John Holmes MBE, as a guest reviewer. Nick has recently added the skill of Choral workshop leader and has adjudicated at several music festivals in the local area.

In his spare time he takes his cocker spaniel on walks and enjoys time away with his wife, Fiona, especially in the Yorkshire Dales.

Christopher is Director of Music at St. Mary’s Church, East Leake, where he plays for Sunday services, Weddings, Funerals and also conducts the church and community choir.

He has a wealth of performance experience; featuring as a soloist, accompanist and singing in choirs in such venues as Nottingham University, Djanology Arts Centre, Nottingham Albert Hall, Southwell Minster, Derby Cathedral and The VoiceBox, Derby.

An accomplished accompanist, Christopher has accompanied a number of choirs in the East Midlands including: Charnwood Choral Society’s Christmas concert (2013), a combined choir of Southwell Choral Society and Newstead Abbey singers, performing Stainer’s Crucifixion (2014) (featuring Stainer’s Great Grandson himself), and at present is the accompanist for the Nottingham Hospitals’ Choir and Ruddington Choral Society. Each Easter he accompanies a collaborative performance organised by Leicestershire Arts which consists of approximately 200 Primary school Children. Christopher accompanies lots of other events for Leicestershire Arts and also students taking graded music exams and has accompanied for Nottingham University’s end of year Music Recitals.

In 2012 he was invited to accompany during a masterclass at the Voice Box in Derby, led by Christopher Underwood, Professor at the Royal Conservatoire of Scotland and was praised for his playing.

He has been on many conducting and singing courses with leading figures in those fields, including: John Rutter, Julian Wilkins, Paul Spicer, Gaynor Keeble and Neil Ferris and in 2012 attended the Association of British Choral Directors Course.

In March 2013 Christopher attended a Jazz singing workshop led by Nia Lynn who is a Voice teacher at the Royal Academy of Music; London. He learned a lot from this and found it an invaluable experience.

As an Organist Christopher has played all over Britain and has been very privileged to play some of the finest instruments in the country. He has played the organ in Liverpool Anglican Cathedral, which is the largest in the U.K; he has also played Coventry, Derby, Lichfield, Truro and Southwell Minster Cathedral Organs and the Organ in Nottingham Albert Hall. 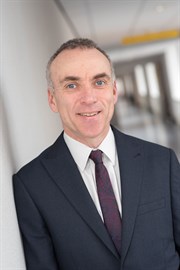 'The Hospitals Choir has been part of the life of the Nottingham Hospitals for 50 years and I count it a huge privilege to be the President at this particular time. The choir performs a number of very professional contributions through the year at a wide selection of events and the members clearly enjoy what they do immensely and their commitment, some for over 40 years, is testament to how much this has come to mean to them. If you enjoy singing then I would encourage you to consider joining and if you, like me, are better placed to enjoy the music presented then please do come along and support the events that are described on this web-'site. In doing so, you will not only encourage the choir but also will be supporting key charitable projects through the Nottingham Hospitals.' 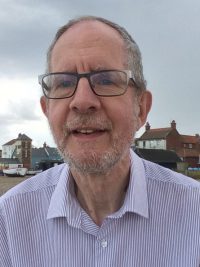 Our patron is the world renowned composer Alan Bullard. Alan was born in 1947, grew up in London and studied with Geoffrey Flowers and Desmond Swinburn when at school, then with Herbert Howells and Antony Hopkins at the Royal College of Music, and with Arnold Whittall at Nottingham University.

He has been writing music all his life, and frequently undertakes commissions for choral societies, church choirs, orchestral societies and many other ensembles. His choral music, both sacred and secular, has been performed in a wide range of venues in the UK, the USA, and elsewhere. Many of his choral works are published by Oxford University Press, and he is the editor of, and contributor to, The Oxford Book of Flexible Anthems, The Oxford Book of Flexible Carols, and the Oxford Book of Easy Flexible Anthems. His works are recorded on CD by such ensembles as Selwyn College Choir, Kings College Choir, The Sixteen, and are regularly broadcast in the UK and the US.

As well as music for a wide range of ensembles and soloists, he has also written much educational music, including the Joining the Dots sight-reading series (ABRSM) and, jointly with his wife Janet, the Pianoworks series (OUP).

He holds an ARCM from the Royal College of Music, a BMus from London University, an MA from Nottingham University and a DU (Honorary Doctorate) from Essex University.